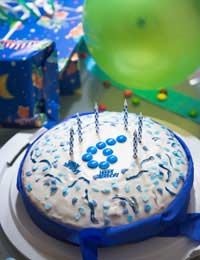 The downside to holding such parties is that there may be a child or children who suffer from allergies which – if unknown – can be caused by any of the selection of foods and treats on offer.

Here we look at the most common causes of food allergies amongst children and in particular those foods more commonly laid on at birthday parties.

Many chocolate products contain nuts and it is wise that you try and establish before purchasing such products if they contain nuts or not. Most products now carry warnings on their packaging or wrappers to this end.

Again a number of children are allergic to eggs. This is a difficult element of food production to police and so again it is important to choose carefully when you are selecting party foods. Many foodstuffs such as quiches, salads and pastries contain at least trace elements of egg so an understanding of how these foods are part together is always useful

In children the most common exhibition of an allergy to tomatoes is hives. Hives may not manifest themselves immediately but can show up within twenty-four hours and for a young child they can be extremely uncomfortable.

As with all of the foods we have mentioned so far there are trace elements of tomatoes found in many foodstuffs and again it is important where possible to establish if this is the case before purchasing them.

The Symptoms of Food Allergies

There are several common symptoms to look out for in your child or in other people’s children which are associated with food allergies and they are:

Anaphylactic Shock is something that many people associate with bee or insect stings but can be present in the cases of individuals suffering from food allergies. Of course it has to be said that the allergy has to be a severe one but never the less the chances of Anaphylactic Shock manifesting itself are there.

The condition of Anaphylactic Shock manifests itself in the sufferer as a great difficulty breathing and problems with the heart which can result in extreme cases with the heart stopping altogether.

It is necessary for adrenaline to be administered immediately if your child or another child in your presence appears to be suffering from Anaphylactic Shock.

When organising a party for your child’s birthday it is wise to plan ahead. And in planning ahead why not ask the parents of those children who have agreed to attend if there are any allergies you should be aware of. This way you can plan ahead and ensure that there is something for everyone.

In addition to this it is a good idea to have a few adult helpers present so that they can monitor what the children are eating. After all, we all know how much children like to sample foods and ensuring they don’t sample anything containing an allergic ingredient is one of the best ways to ensure that everyone enjoys the party.