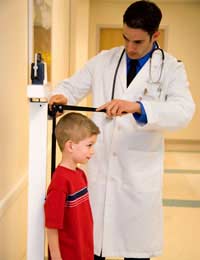 Having children with allergies, whatever form they are, is a concern for parents, and worries about any effects that it might have on growth just add to this. Different kinds of allergies, especially food allergies, can affect children’s growth patterns, and treatments can have an effect as well. It is important to discuss any concerns about children’s growth or their allergies with a doctor, nurse or dietician.

Coeliac disease isn’t strictly an allergy, but an autoimmune disease triggered by the protein gluten, which is found in wheat, barley and rye. The disease causes the body’s immune system to attack the gut, causing diarrhoea, pains in the stomach, joints and bones. It is treated by avoiding gluten. Coeliac disease does appear to stunt growth, because children with coeliac disease tend to be shorter and lighter than average. As with food allergies, this could be because the children have to eat a more restricted diet, or because they don’t absorb nutrients properly.

Milk allergies in babies can affect their growth. Symptoms of milk allergies in babies include itching, rashes, sickness and diarrhoea, and the sickness and diarrhoea can make them dehydrated and reduce the levels of nutrients that they absorb. Breast milk is the best milk for babies at least for the first six months, and up to the age of two, and should not trigger any allergies (and may in fact help children build a healthy immune system). For babies on formula milk, talk to a nurse or doctor about any worries over allergies, or if your baby doesn’t seem to be growing properly.

Some treatments for allergies may have potential to stunt growth. Corticosteroids are very useful at reducing the inflammation associated with allergies, but at high doses, they can stunt growth in children. When these drugs were first used they could only be injected or taken orally, and the doses were quite high, because that was the only way the right amount could get to where it was needed, such as the nose in hay fever or the lungs in asthma. Corticosteroids can now be given locally (where it will be used), for example as nasal sprays or inhalers. Because the drug goes to just where it is needed, the doses can be lower, and so will have less of an effect on growth.

Inhaled corticosteroids do still seem to have a slight effect on growth, of around half an inch in the first year, but these children do catch up, and in the long term, they are no shorter than their peers are. Untreated asthma itself can stunt growth, so it is more important to get the asthma under control.